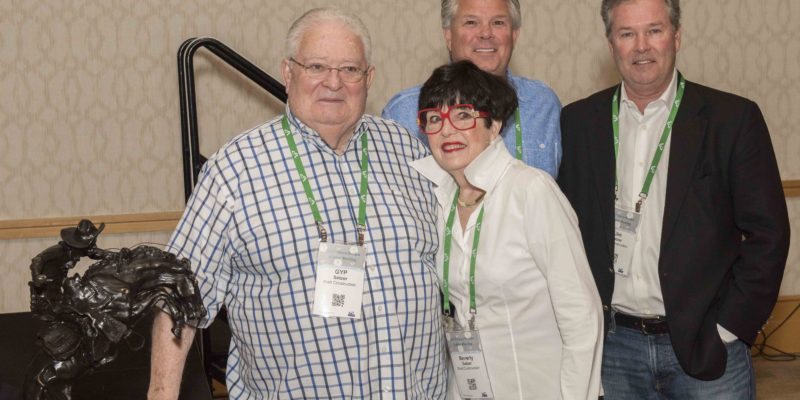 Lexington, KY – W.T. “Gyp” Setzer recently received the prestigious 2017 Pioneer in Steel Award from Varco-Pruden Buildings. The award was presented at the National Builder Meeting’s Southern Awards Luncheon in Phoenix, Arizona on March 21, 2017. Setzer is only the second person to receive the award.

“The Pioneer in Steel Award is a lifetime achievement award,” said Joe Gorham, District Manager of Varco-Pruden Buildings. “In 2015, we at Varco-Pruden realized that we should start recognizing those that have meant so much and been key players in growing, formulating, and supporting the systems building industry and Varco-Pruden over the years, those who have helped ‘pioneer’ the way.”

Setzer has been involved in the commercial construction industry since 1952 when he started working for the family business at age 14. Setzer Steel Systems was established that same year. To date, he has completed over 1,000 projects, totaling more than 20 million square feet and valued at more than $500 million. Some of Setzer’s most notable projects include American Freightways, Jockey International, KY Eagle Beer, Midstates Distribution, Lexair, Van Dyne Crotty and Magna Graphics, just to name a few.

Though Setzer retired in 2004, the family business continues. Gyp Setzer’s son, Brett T. Setzer, now leads both Brett Construction Company and Setzer Properties. Founded on the 25 years of previous experience of Setzer Steel Systems, Brett Construction Company was established in 1987 and has more than 30 years of commercial construction experience, including industrial, educational, institutional and commercial clients throughout the Commonwealth of Kentucky and the United States.

Setzer Properties is a national real estate investment and development firm with more than 28 years of experience. The firm has developed more than 5.6 million square feet of space for projects across 26 states totaling more than $532 million. Both firms are headquartered in Lexington, Kentucky.

Varco-Pruden Buildings is a world leader in providing innovative pre-engineered steel building systems. Each year, Varco-Pruden supplies approximately 6,000 buildings ranging from 1,200 square feet to more than one million square feet under roof. With headquarters in Memphis, Tennessee, and manufacturing and service centers located from coast to coast, the company provides buildings throughout North America. The company utilizes a network of nearly 1,000 independent authorized dealers to offer state-of-the-art design/build services in local communities across the United States and Canada, as well as throughout Central and South America, Europe, and Asia. Brett Construction Company has worked exclusively with Varco-Pruden since 1988 and is now the second largest builder within their network.